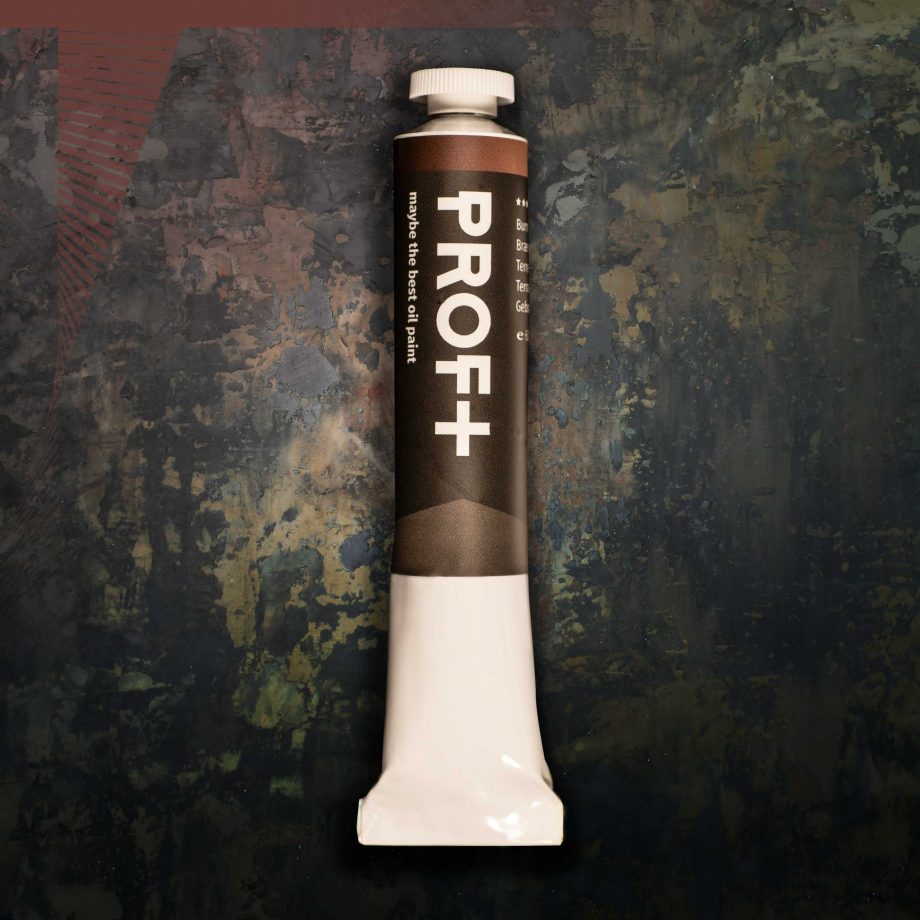 Burnt Sienna artist color with high pigment content, pure linseed oil and without solvents. The consistency is like butter at room temperature, and for many artists the paint can be used directly from the tube without the addition of paint medium.

Burnt Sienna artist color with high pigment content, pure linseed oil and without solvents. The consistency is like butter at room temperature, and for many artists the paint can be used directly from the tube without the addition of paint medium.

Burnt sienna is today mostly made with a synthetic pigment like PBr7 (the one we use) or PY43. Both are a chemical match of the natural earth colour pigment (PR102). The natural or organic variant has traditionally been made from the red soil at Siena in Italy. The burnt form becomes darker and more reddish brown and separates a number of impurities during heating.

There is not much left of the type of iron, ocher, manganese and silica clay soils in Siena. It was depleted in the 1940s, so the natural pigment is increasingly coming from Sicily and Sardinia. Today, as I said, one can achieve exactly the same result in other ways. One can get the desired colour without getting soil under the nails. It is done in a factory simply by means of iron oxide, oxidation, acid bath and heat.

Terra di Siena (Earth from Siena) has a special history. The earth, together with animal fat, was painted in cave paintings about 44,000 years ago. It clearly shows thatf this pigment full of rust crystals is both stable and holds up to the test of time. The earth was also used in frescoes by the Romans without having its current name, for the city-state of Siena did not yet exist even though Sena Iulia was the Roman name for the province of Tuscany itself. In the Renaissance, the city-state of Siena had emerged, and here the pigment was still used for painting. But again, it was not called Sie(n)na. Giorgio Vasari, the first real art historian of the period, consistently called it ‘terra rossa’ (red earth). Red soil was at that time used daily by painters like Caravaggio, and was exported to other parts of Europe. Rembrandt used it e.g. diligently. Burnt Sienna (Burnt Sienna) was first introduced as the name of a product by a British paint manufacturer in 1853, and it became internationally associated with the specific colour. Today, many of the world’s figurative artists and portrait painters use burnt Sienna in their colour palette.

This oil paint can and must be mixed with oil paints from other manufacturers. The same goes for paint. Since this is such a chemically pure and simple product without mysterious fillers, it must also be mixed with your own favourite paint, whether it is dammar and linseed oil, stand oil, black oil with litharge, Liquin™, Oil gel™ Maroger, lavender spikeoil, etc. For good control over consistency and detail work, we recommend our own paint medium. If you use solvents to clean brushes outdoors or in a ventilated room, Gamsol™, turpentine, Terpenoid™ Alcohol and ethanol, etc can be used. If, on the other hand, you do not like solvents, you can use special cleansing soap or liquid brown soap for the same purpose.

Burnt Sienna is not toxic, but must not be eaten or otherwise ingested. The product has not been allergy-tested, but if you only use it for its intended purpose – to paint with a brush and palette knife – there is no immediate health risk.