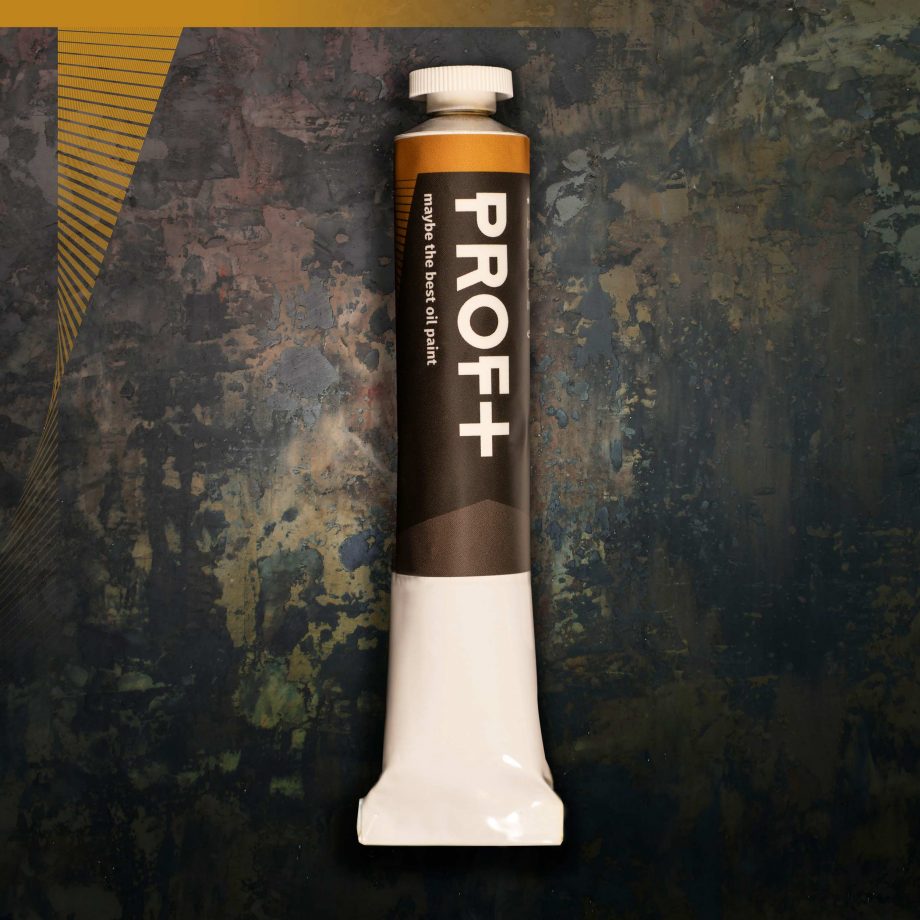 Indian yellow artist color with high pigment content, pure linseed oil and without solvents. The consistency is like butter at room temperature, and for many artists the paint can be used directly from the tube without the addition of paint.

Indian yellow artist color with high pigment content, pure linseed oil and without solvents. The consistency is like butter at room temperature, and for many artists the paint can be used directly from the tube without the addition of paint.

The popular Indian yellow completely disappeared in trade for a long time, which we elaborate on below. Today, the color is produced predominantly synthetically in various ways. The pigment in our version is both organic and synthetic and is called Isoindolinone Yellow (PY110) with the trade name Irgazin Yellow. It is a tetrachholo-isoindolinone-based organic pigment with good brightness, strong colour ability and eminent lightfastness. The first synthetic version was patented in 1946, and commercial production of the pigment began in the 1960s.

The natural Indian yellow has been widespread in India (hence its name) and it is also where the production has taken place most of the time since the 15th century (China has been a secondary supplier). The color is believed to have been introduced to India via Persia. The pigment has been used in the West since the 17th century and has been relatively easy to obtain until 1883. The actual production of the natural pigment ceased in 1908 and after 1921 it was no longer possible to obtain it. The color was one of J.M.W Turner´s (1775-1851) favorites, and if we go further back in time we see it also used by Johannes Vermeer (1632–1675).

The disappearance of the natural pigment is a major problem for some art conservators today, who would prefer the original organic pigment to be as true to the original work of art as possible. In defense of the synthetic/organic pigments we have available today, it can be argued that we are in no way inferior. They have the same color power and possess far greater durability and lightfastness, which is definitely not insignificant when we talk about preserving works of art. There are constant improvements in the production of pigments.

To this day, there is still doubt about the origin of the pigment and no one knows for sure where and how it was manufactured for trade. In 1786, Roger Dewhurst claimed that it was urine concentrate from cows that had eaten turmeric. In 1830, the French painter Jean-François Léonor Mérimée denied that urine was included in the production despite the strong odor. He was convinced it was about the sap from the shrub Memecylon tinctorium. In 1844, the British chemist John Stenhouse also denied that urine was present, as there was not the slightest trace of ammonia. He clung to the many sharp crystals and hypothesized that gallstones from various animals might have been involved. Everything from Elephants to camels could be considered.

The most amazing story is from 1883. A Troilokyanath Mukhopadhyay Mukharij from Calcutta claimed that it was made from the urine of cows in the Bihar region. It was reported that the cows were systematically malnourished with mango leaves and water, which not only debunked the cows but also made them suffer with crystals in the urine, and kidney stones. The urine was reduced / dehydrated into lumps. It’s just a statement, and one has not been able to demonstrate that it actually took place. It has been assumed that this was plausible because at the same time laws were introduced which prohibited the mistreatment of cows. In 2004, Victoria Finlay (journalist and author) thought it was a fairy tale with the cows. In 2014, the question again made researchers curious, and in 2018, Plöger, Shugar and others succeeded. to get a sample of the natural pigment from the Royal Botanical Gardens. In 2019, they confirmed the animal’s animal origin, and identified the source as urine based on hippuric acid, which is a clear key marker.

This oil paint can and must be mixed with oil paints from other manufacturers. The same goes for paint. Since this is such a chemically pure and simple product without mysterious fillers, it must also be mixed with your own favorite paint, whether it is ponds and linseed oil, stand oil, black oil with litharge, Liquin ™, Oil gel ™ Maroger, lavender spikeoil, etc. Too good control over consistency and detail work, we recommend our own paint. If you use solvents to clean brushes outdoors or in a ventilated room, Gamsol ™, turpentine, Terpenoid ™ Alcohol and ethanol, etc can be used. If, on the other hand, you do not like solvents, you can use special cleansing soap or liquid brown soap for the same purpose.

Indian yellow is toxic and must not be eaten or otherwise ingested. The product has not been allergy-tested, but if you only use it for its intended purpose – to paint with a brush and palette knife – there is no immediate health risk.