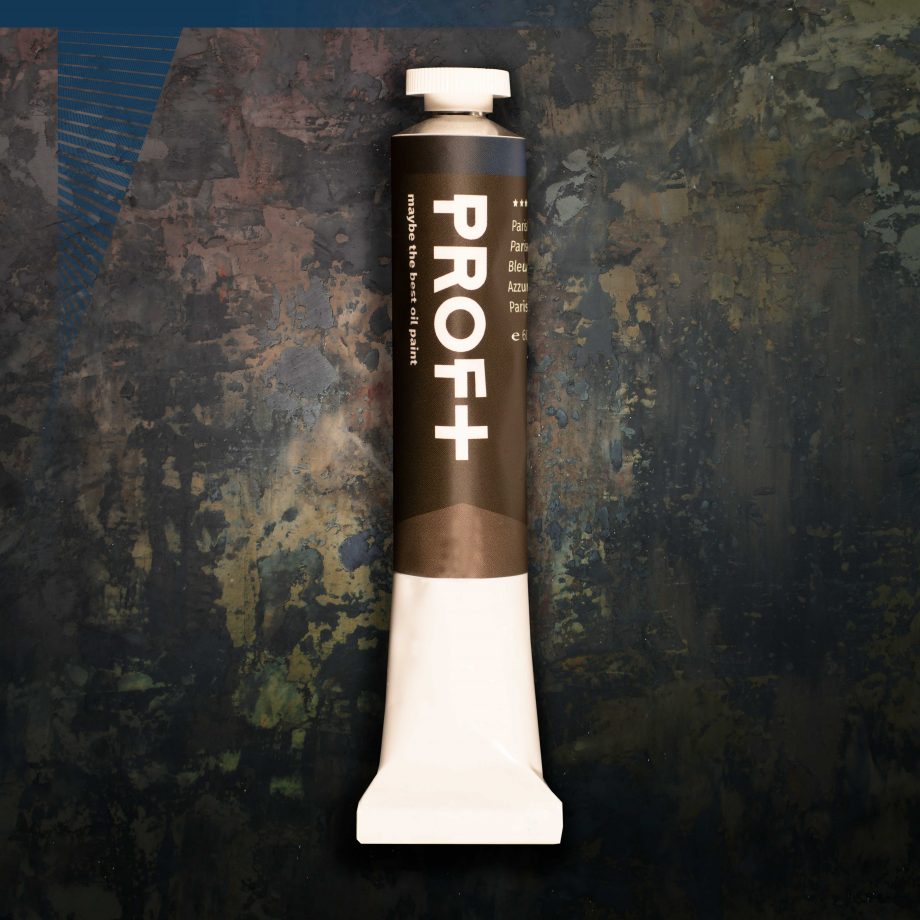 Paris blue artist color with high pigment content, pure linseed oil and without solvents. The consistency is like butter at room temperature, and for many artists the paint can be used directly from the tube without the addition of paint.

Paris blue artist color with high pigment content, pure linseed oil and without solvents. The consistency is like butter at room temperature, and for many artists the paint can be used directly from the tube without the addition of medium.

Paris Blue PB27 (Fe7(CN)18 (also (Fe4[Fe(CN)6]3) · xH2O) ) is a very strong lighter cool blue color. It is special i.a. because its pigment was the first synthetic chemically stable and relatively lightfast pigment in mass production. It became a favorite color to use in the ink in Japanese woodcut prints during the Edo period (Cf Hokusai et al). Funny enough, Paris blue has been invented more than once, as the blue color was used in Egypt during the time of the pharaohs and made with what we today call Cyanide.

Today, the synthetic new invention also goes by the names Berlin blue, Preussian blue. The latter is perhaps more significant, for Johann Jacob Diesbach was the first to produce the color in the Prussian (now German) capital Berlin in 1706. The pigment is believed to have been created by Diesbach using potash stained with blood to create some red cochineal dye. The original dye required potassium chloride, ferrous sulfate and dried cochineal. Unexpectedly, the blood, potassium chloride and iron sulphate reacted to form a compound known as iron ferrocyanide. So unlike creating a red pigment, it gave a distinct blue hue. When this art was refined, the result was called Preußisch Blau and Berlinisch Blau by Berlin pigment dealers. Larger industrial manufacture, however, came only when the art scene in Paris discovered paint made with the pigment. Hence the Danish name Paris Blue.

This oil paint can be mixed with oil paints from other manufacturers. The same goes for medium. Since this is such a chemically pure and simple product without mysterious fillers, it must also be mixed with your own favorite medium, whether it is dammar and linseed oil, stand oil, black oil with litharge, Liquin ™, Oil gel ™ Maroger, lavender spike oil, etc. For good control over consistency and detail work, we recommend our own paint. If you use solvents to clean brushes outdoors or in a ventilated room, Gamsol ™, turpentine, Terpenoid ™ Alcohol and ethanol, etc can be used. If, on the other hand, you do not like solvents, you can use special cleansing soap or liquid brown soap for the same purpose.

Paris blue is not toxic / toxic, but must not be eaten or otherwise ingested. The product has not been allergy-tested, but if you only use it for its intended purpose – to paint with a brush and palette knife – there is no immediate health hazard.